"The difference between genius and stupidity is that genius has its limits." —Anonymous

The word "dunce", meaning a dull-witted or ignorant person, comes from the name of John Duns Scotus (1265-1308), one of the greatest minds of his time. Scotus, born in Scotland, wrote treatises on grammar, logic, metaphysics, and theology. He was educated at Cambridge and Oxford and pursued his master's degree in theology at the University of Paris where, in 1303, he became embroiled in one of the most heated disputes of the day. France's King Philip IV had moved to tax the Church in order to finance his war with England; in response, Pope Boniface VIII threatened to excommunicate him. For supporting the pope, Duns Scotus was banished from France. He later assumed a university professorship in Cologne. The term "dunce" was coined two centuries later by people who disagreed with Scotus' teachings and his defence of the papacy. To them, any of his followers (a "Duns man" or "Dunce") was dull-witted, "incapable of scholarship and stupid". (source)

Sir Isaac Newton's mother didn't think education was needed to become a farmer, the profession she wanted him to take up, so he had to quit school.

Before Isaac Newton could become Lucasian Professor of Mathematics at Cambridge, a special ruling by the Crown was required; the monarch was head of the Church of England and Cambridge was a church school. It was ruled that Newton did not have to become a church member to assume the position. He delivered about eight lectures a year that were deemed to be rather poor. (source)

While Sir Isaac Newton was a Member of Parliament, his only recorded utterance was a request to open the window. (source)

In 1667, Gottfried Leibniz, who would later become a well-known mathematician and philosopher, wanted to join a society of alchemists. He compiled a letter from the writings of the most celebrated alchemists and sent it to the society. The letter consisted of the most obscure terms he could find, and he himself, he said, did not understand a word of it. Afraid to be thought ignorant, the society invited him to its meetings and made him secretary. (source)

Albert Einstein did not speak until the age of four.

It is not true that Einstein was a terrible student as a youth. While he was slow to learn to speak before entering school and did poorly at French while in school, his academic records indicate that he was a child prodigy who understood college physics before his eleventh birthday, a strong violin player, and skilled in Latin and Greek. (source)

Thomas Jefferson invented the swivel chair, the pedometer, a letter-copying press, a tilting table, a more effective plough, and several other items. He never patented any of his inventions, wanting people to have free use of them.

Eli Whitney made almost no money from his invention of the cotton gin. Pirated copies of his gin appeared in such quantities that it was impossible to sue all of the offenders. (source)

Einstein's ideas on relative acceleration were partly inspired by the free fall of a man who fell off a roof in Berlin. The man, who survived without injury, told Einstein that he had not felt the effects of gravity.

In 1905 Albert Einstein wrote his famous Special Theory of Relativity. It was published in a scientific journal that same year, but took many years to gain general acceptance. In fact, it was not verified by actual experiment until 25 years later. Two years after that paper was published, Einstein wanted a job as assistant professor of mathematics. This job required the applicant to submit a thesis paper, so Einstein submitted his Special Theory of Relativity. The university rejected it.

View more facts about: College and University | Physics and Physicists

Albert Einstein's last words will never be known. He spoke them in German, but the attending nurse didn't know German and so couldn't recall what was said. (source)

Up to half of all North Americans with a genius IQ (140 or higher) never graduate high school. (source)

The Greek scientist Aristarchus believed that the motions of the heavenly bodies could easily be understood if it were assumed that all of the planets, including Earth, revolved around the sun and that the stars must be infinitely far away because they seemed motionless. Copernicus knew of Aristarchus' views and mentioned them in a passage in De Revolutionibus Orbium Coelestium that he later eliminated, as though not wishing to compromise his own originality.

It was a cardinal who urged Copernicus to publish his theory that the Earth moved around the Sun. (source)

Antoine Laurent Lavoisier (1743–1794) did more for chemistry than anyone else. He was one of the first to introduce effective quantitative methods in the study of chemical reactions. He explained combustion. He clearly described the role of oxygen in the respiration of plants and animals. He developed a system of classification of substances that is the basis of modern chemical nomenclature and the basis of the distinction between elements and compounds. However, Lavoisier failed to do the one thing he wanted the most to do: discover a new element.

Because Saturn is tilted, when its rings are facing Earth edge-on they "disappear" from our view. We now know this happens every 14 years or so, but poor Galileo questioned his sanity when they "disappeared" and then "reappeared" a few years later. (source)

Looking through his telescope in 1609, Galileo saw that there were spots on the Sun, imperfections on the Moon, and that the Milky Way was composed of millions of faint stars. His most stunning (and controversial) discovery was of satellites orbiting Jupiter, dashing the concept that the Earth was the center of the Universe. (source)

James Macie, the illegitimate son of the duke of Northumberland, was an avid scientist who discovered a new way of making coffee, studied tears, and did other research. Macie's illegitimacy handicapped him in England, and, possibly for that reason, his will specified that, if no blood relative survived him, his entire fortune (worth 104,960 gold sovereigns at the time of his death in 1829, an enormous sum of money at the time) would be left to the United States of America, for the foundation of "an establishment for the increase and diffusion of knowledge among men", to be named after him. Since on his father's death Macie had been given permission to take on his father's name of Smithson, the new American institution was called the Smithsonian Institute. (source)

It is believed that 90% of all scientists who have ever lived are alive now, and that as many scientific papers have been published in the years since 1950 as were published in all the centuries before 1950. 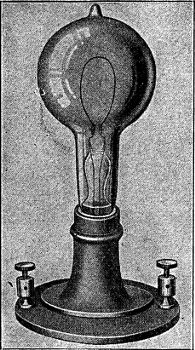 The inventor of the electric light was not Thomas Edison. In 1802, 77 years before Edison perfected a filament for the incandescent lamp, Davy caused a platinum wire to glow by passing an electric current through it.

Thomas Edison invented the word "Hello". The first written use of the word spelled with an "e" is in a letter of his in 1887 suggesting that saying "Hello" was the best way to start a telephone conversation. (source)

In 1626, Sir Francis Bacon, one of the most influential minds of his time, was watching a snowstorm. He was struck by the notion that maybe snow could be used to preserve meat. Determined to find out, he purchased a chicken from a nearby village, killed it, and then, standing outside in the snow, tried to stuff the chicken full of snow to freeze it. The chicken never froze, but Bacon caught a cold that turned into pneumonia, and died shortly afterward. (source)

In movies and television, scientists are more likely to suffer a violent death than members of any other profession.

In 1920, the New York Times publicly scoffed at Professor Robert Goddard, the father of space exploration, for his claim that rockets could function in a vacuum. "[H]e seems only to lack the knowledge ladled out daily in high schools", the paper stated in its January 13 issue. However, on July 17, 1969, just before Apollo 11 landed a man on the moon, the Times published the following statement: "It is now definitely established that a rocket can function in a vacuum. The Times regrets [its] error". (source)

Psychologist Catherine Cox has estimated that Goethe had an IQ of 210. (source)

The first attempt to measure intelligence with a test was in a London museum in 1882. Some of the tests involved judging the weights of rocks, distinguishing between high-pitched sounds, and reacting to pinpricks. (source)